HOT TAKE: Why We Need Warnie As a Commentator

HOT TAKE: Why We Need Warnie As a Commentator 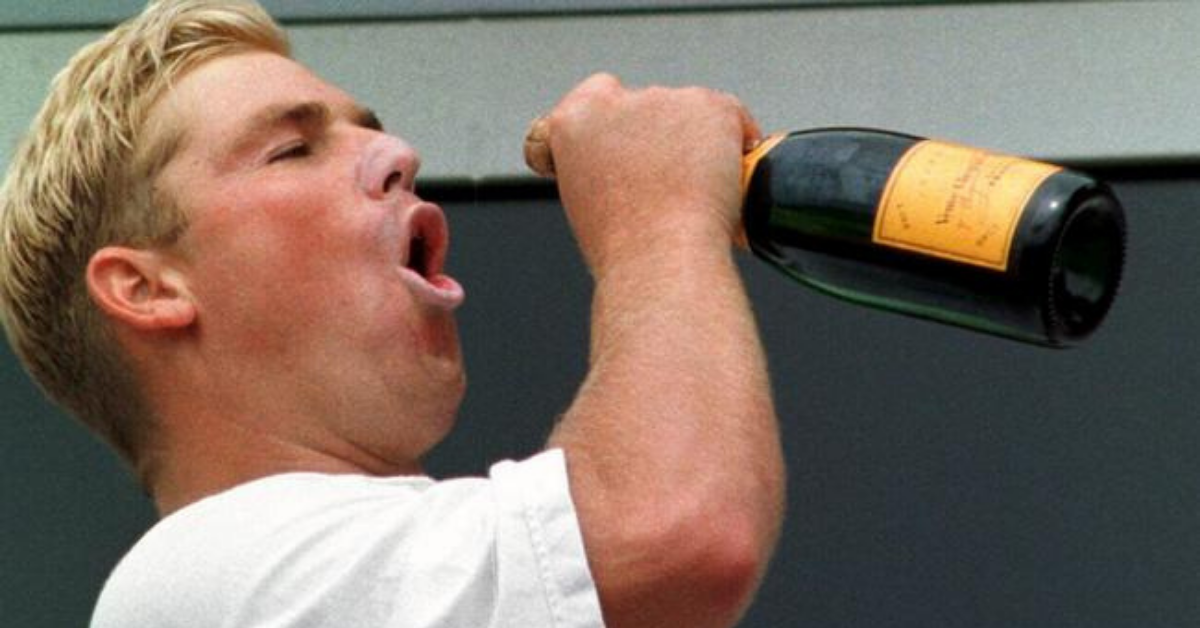 The 2021 Ashes series has so far been a tidal wave of success and happiness for Aussie fans. Despite injuries, covid scares, and uncertain openers, the team has easily powered through England in the first two tests, and are looking likely to do the same again this week.

If you ask most Aussie dribblers what the worst part about this series has been, I can guarantee you that Shane Warne’s commentary would be their outstanding lowlight. Between his hatred for Mitchell Starc, his pointless tangents that take priority over actual commentary, and his thinly-veiled advances at Isa Guha, he’s once again leaving his mark on an Ashes series.

Herein lies the conundrum: How can we as dribblers come to terms with a man of such immense stature, a man who’s contributed so much to the sporting and dribbling community, becoming so universally disliked?

Just as Warnie has cast a small black shadow over this otherwise flawless series, so has he begun to chisel away at the pristine career that has for decades pushed the boundaries of what an elite sportsman can be. His antics always delivered wild yarns without crossing over into offensive or malicious areas, and considering his performance on the pitch never disappointed, it was always play on for Warnie. 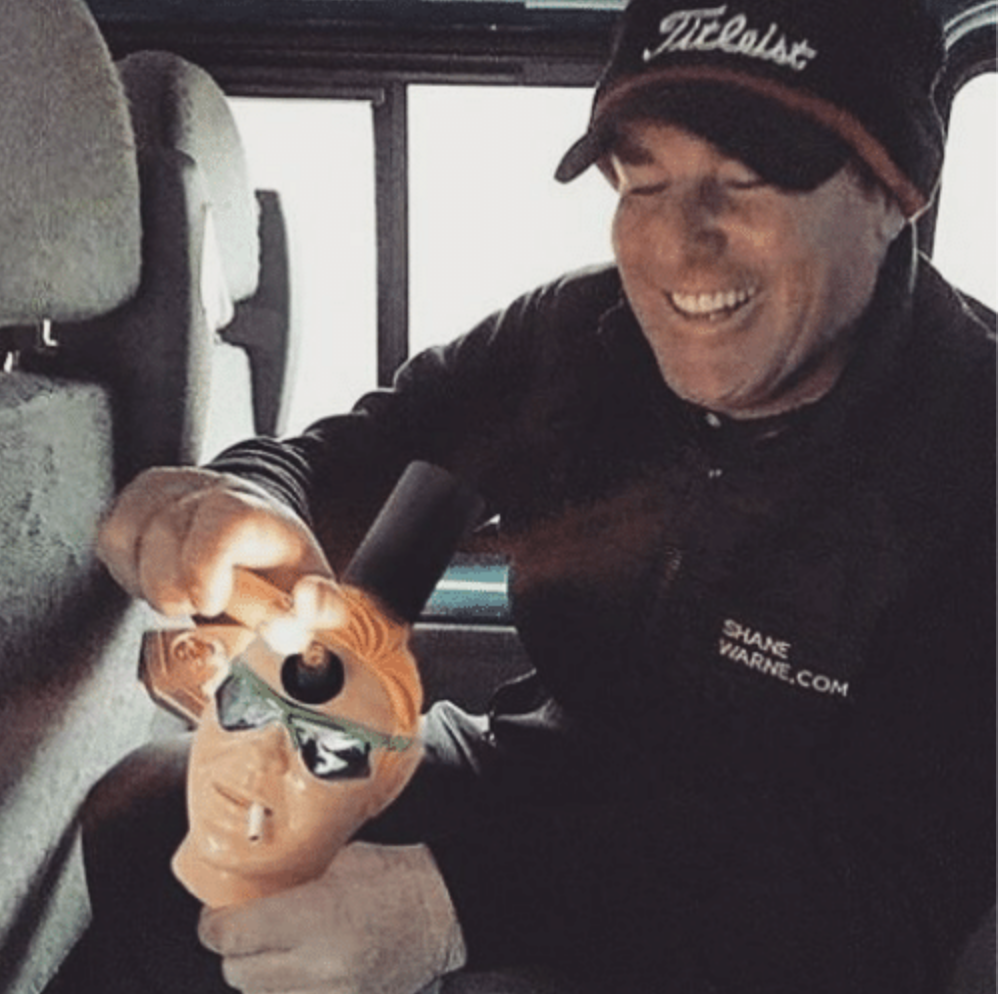 For so long, Warne was the tallest of poppies, an unassailable dribbler who couldn’t be faulted, until now… but that’s ok. Australians love nothing more than cutting down a tall poppy, it’s part of our history and our heritage. We’re not a society who says that our leaders are saviours of the world or chosen by god, we give them as much vitriol as we would the bloke who’s taking too long to order a schnitty in front of you at a pub.

Would we really accept that one of our cultural heroes is some sort of perfectly righteous and all-knowing demigod? Of course not! He’s a dribbler just like the rest of us, spouting unqualified opinion and unwavering bias… and that’s why we love him. How much less would we, as dribblers, have to talk about this series if it wasn’t for Warnie’s commentary?

Warnie is such a strong and true dribbler that his dribble provides the foundational dribble upon which we as a community can build our own dribble on. He is a gift given to us by the gods of dribble, but just like anything in this world, be it Warnie’s career or this Ashes series, the good cannot exist without the bad. Like many Punters and Dribblers, there isn’t much I enjoy more than a good old fashion stat. Whether it’s from Dave Middleton from the long-gone The Footy Show, or Rain Man himself going Balls Deep on About Even, stats have the ability to back up a narrative being pushed, or equally, tear one down.

One thing that I do enjoy more than hearing a well-crafted stat, is trying to find stats out of a statement. That is why a statement from Bloke in a Bar’s own Kempy really piqued my interest. A few weeks ago, Kempy proposed that conceding 50+ in the season 2021 is ‘different’ than other years. What really piqued my interest in this statement was the use of the word ‘different’. It is a vague term in this context, yet it seems like the most accurate description of 50+ games this season.

As most NRL fans know, conceding 50+ during the season is a death sentence. No team has been able to win the premiership after being on the receiving end of a scoreline of that nature. Yet, you can’t help but feel that Kempy’s statement of them being ‘different’ in 2021 stands true. Each week we watch the Rabbitohs notice up win after win in their hunt for a top 2 position, but is it all in false hope as they have conceded 50+ against the current top 2 sides? 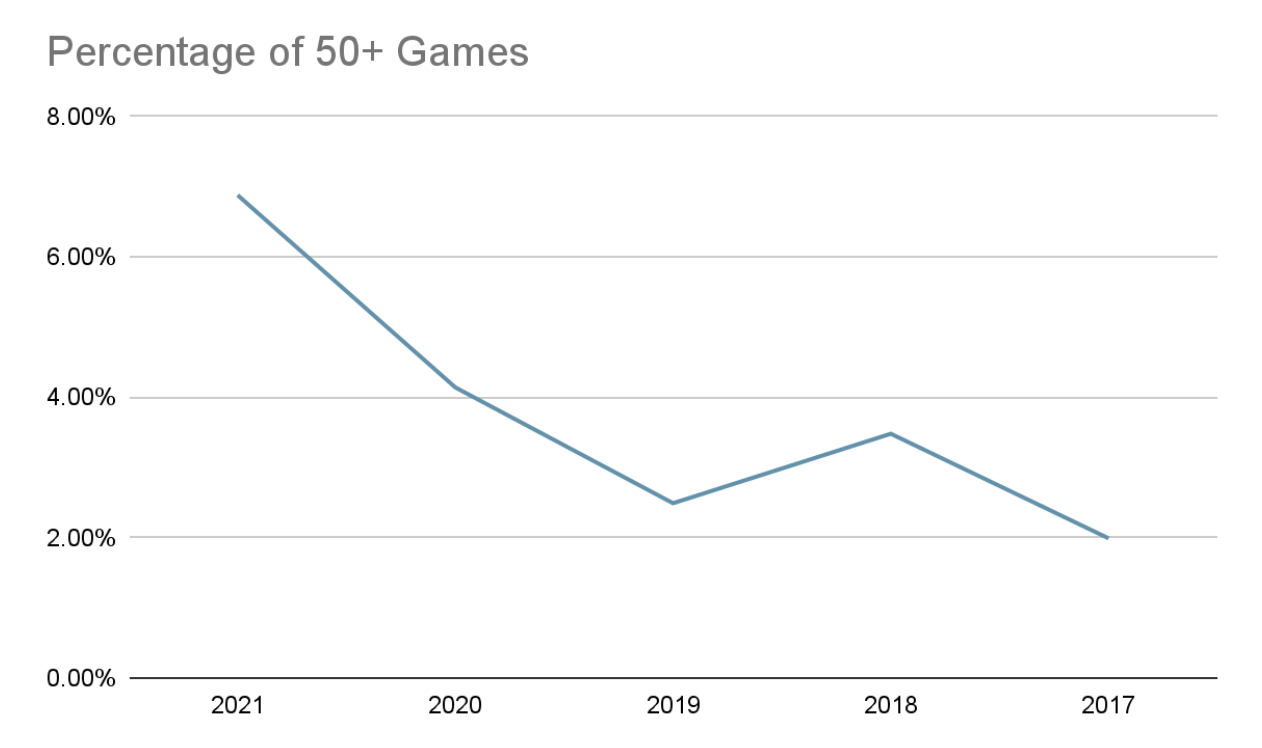 As previously mentioned, the Rabbitohs very much seem to be one of the teams in focus when discussing 50+ score lines in 2021. In past years, when you thought of teams to concede 50+ you often thought of the bottom 4-5 teams coming up against the highflyers of the season. However, in the 2021 season, with teams such as the Rabbitohs conceding 50+ not once, but twice, are we seeing those higher-ranked teams on the wrong end of the score lines? In short, no. Based on the average position of all teams to concede 50+, 2021 actually produced the lowest-ranked average of the past 5 seasons. This has in fact been a slow trend over the past 5 seasons.

Apart from 2018, the average position of teams conceding 50+ has been decreasing year on year, starting at 9.0 in 2017, down to 11.3 this season. That is a decrease of 2.3. On the other end of the scale, the average position of the teams dishing out these thumpings has fluctuated over the past 5 years. It peaked as high as 3.6 in the 2020 season, and as low as 5.1 in 2018, a season where we saw one of the closest ends to a regular season, with all of the top 8 teams finishing within 1 win of each other.

With the average positions not reflecting the season, maybe the margins can shine some light on this season of 50+ blow-outs? Again, no. In a season where blow-out scores are the hot topic of discussion, the average margin of games where a team has raised the bat for a 50 is actually the lowest it has been in the past 3 seasons. In 2019, the average margin was 50.6, which means that statistically if you gave the losing team a 50 point start, they would still not be collecting the 2 points more times than not. This average margin dramatically dropped in 2020 to 43.0, with it dropping again this season down to 41.3. Prior to 2019, 2018 and 2017 produced 38.1 and 40.0 averages respectively.

After analyzing all of these stats regarding 50+ score lines, the frequency of these score lines is the only one to stand out as abnormal. And that is where the problem of ‘different’ comes in. As fans, the sheer amount of 50+ score lines this season has thrown us for a loop. While I love that stats have the ability to shine a light on aspects of the game we seem to overlook as fans, they are not the whole game and you can’t use them as definitive proof of an outcome. Does the fact that the Rabbitohs have notched up dual 50+ games this season rule them out of being victors on grand final day? Maybe, but I am excited to see how this ‘different’ season pans out.

The Rise and Fall of Danny Exotic

The Rise and Fall of Danny Exotic

Dear my beloved Punters and Dribblers,

I write to you all, with a heavy heart. A heart that is ordinarily pumping the sweet properties of merlot and redbulls throughout my cardiovascular system, but now pumping nothing but fragmented dreams and melancholia.

After casting my ears over a recent dribble, or as I’d like to call, a piece of audible detritus, from my sworn enemy and former childhood neighbour, Dot Point Dribbler, and then to be subjected to slander from both Tom and Eddy for my lack of content since my famous bender prior to Penriths Grand Final loss last season which saw me earn the illustrious baggy green, I feel obliged to address not only the punter, but more importantly the dribbler.

It’s well documented my rise to fame and dribbler immortality last year. On the back of Penrith’s record-breaking winning streak, yours truly found himself in a frequent state of pure elation and euphoria. As the wins came in, so did the festivities.

Life was good, every weekend was almost like a Hollywood movie script. A Nathan Cleary masterclass – steering Penrith to another victory, followed by the weekly expedition to my beloved Big Cat (Penrith Panthers Leagues Club) where me and my fellow Penrith fans would endeavour into the 4-12hr pulverisation of our mind, body and spirit, courtesy of our good friends R&R.

The plethora of regular-season wins inevitably led to the Minor Premiership and a box seat in the 2020 finals series, in a month that can only be rivalled by that of the great Ben Cousins, myself and all of Penrith were whipped into an absolute frenzy.

With a nail-biting preliminary final victory over South’s, it quickly became a reality. Penrith were ready to seize the premiership, a feat that hadn’t been achieved since I was only a young bloke, spear tackling Dot Point Dribbler on his front lawn in Glenmore Park in 2003. It was a momentous occasion, and that called for a monumental celebration, so I brought to you, the Punter AND the Dribbler – The Big Dance Luncheon.

A 6hr session of sending Vodka Cruisers on a one-way ticket to our throats, hours of YouTube highlights, heavily featuring Scott Sattler’s famous tackle on a dilly-daddling Todd Byrne and of course some TV Dinners.

Now as we all know, that traumatic night didn’t quite go Penriths way, DYOR had my measure, and I was broken, PROUD, but broken. But that didn’t stop me and my companions from embarking on what quickly became, the greatest bender of all time. 48hrs in, the reality sunk in. Keeping the Disciples of St PVL updated with the atrocities that were unfolding at the foot of the mountain, I found myself becoming heckled and the subject of abuse by dribblers like Nilso, Ironside and Finnochario. The old saying – never kick a dribbler while he’s down, had apparently been forgotten.

HSP #238 – Under The Pump, all the pieces of the puzzle connected. I earnt my baggy green. What initially appeared to be a sympathy vote, for a broken dribbler who’d had his heart ripped from his chest by a relentless Storm outfit, quickly became a realisation, a realisation that I was the inspiration that led Eddy to drop to a knee and propose to his fiancé, I was the reason Tom felt obliged to provide Evie-Rose with a sibling, I was the reason KTD slotted a plethora of steedens through the sticks, the reason Nilso set a deposit limit on his BlueBet account and the reason DYOR ripped that cone to render his legs useless.

A Ton on debut with my Matty Nabes – Season Launch was a last-ditch effort to build back my legacy. A legacy forged by R&R. Then came lockdown, COVID reared its ugly head and precluded my chances of continuing the great legacy I built the year prior.