The wide brown land of Australia is home to many different creatures of all shapes and sizes, and a staple of any rural town worth its salt is a BIG THING. Big things give towns a sense of identity, they proudly promote the niche industry that is at the heart of their town, and most importantly, they give people driving past something to look at and go, “oh, kinda thought it would be bigger.”

With over 150 BIG objects around the nation and a lot of time on my hands thanks to the off-season, I thought I would explore which large statue would prevail in an ultimate BIG THING FIGHT. Food and inanimate objects haven’t been considered in this list and to keep things fair, I’ve separated humans from animals.

There are around 13 big humans in Australia, including three Ned Kelly’s and one King Neptune in Two Rocks WA. As a gang the Kelly’s are heavyweights, and would easily overpower the 3 big Miners, the gold panner and the Scotsman, before shooting down the big Soldier and, much like their namesake Craig Kelly is trying to do, finally taking down The Big Farmer! Elsewhere the Big Bogan has passed out from drinking all the Big Beers, and the Big Aboriginal Hunter is savagely killing the Big Captain Cook. Rightly so, he’s even doing a fucking Nazi Salute. 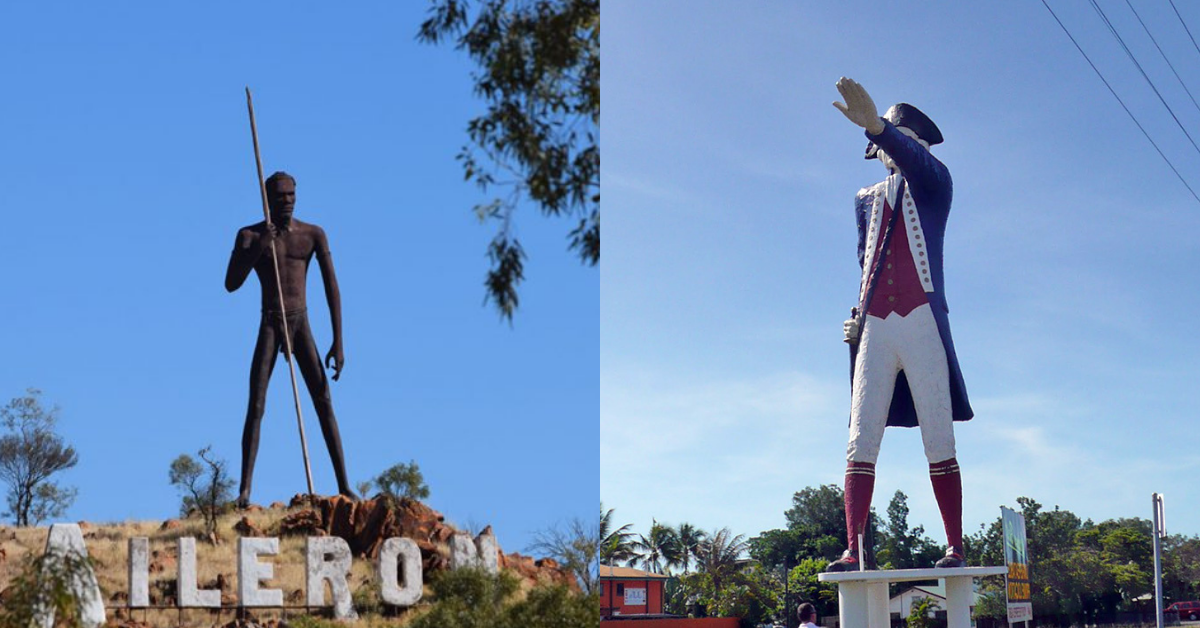 That leaves the Aboriginal Hunter, 3 Ned Kelly’s, King Neptune, and Adelaide’s 3-tonne Santa. Not having grown up with the religious luxury of Santa’s yearly visits, I’m unaware of the power possessed by St Nick, but basing this on appearance and clothing, I don’t think he’d last too long. Despite the fact he’s a literal god, Neptune would be powerless in the dry plains of the outback, or the rugged terrains of the bush, so the advantage goes to the Hunter and the Kelly’s if they can drag him away from the coast.

And so we’re left with Three Ned Kelly’s and Anmatjere’s Aboriginal Hunter, who stands as tall as all 3 bushrangers put together. This size may be his ultimate downfall though, as the Hunter’s ability to hide in the wide expanse of the Northern Territory may be hindered by the fact he’s 17 metres tall. It would be a great fight, but with superior numbers and weaponry, it looks like this time the Kelly’s will be the last ones standing. 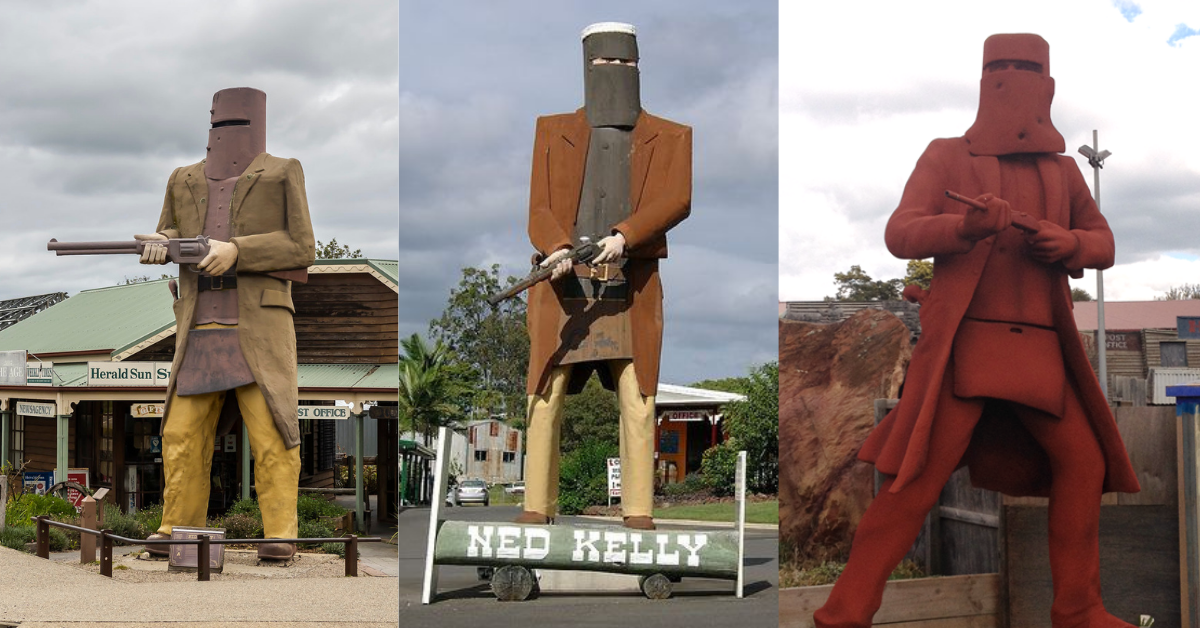 Moving to the Animal world and there are some early casualties that while unsurprising, are unfortunate nonetheless. Fish, Birds, turtles, a platypus, a penguin, a moth and a Koala of ‘most defenceless animal on earth fame’ would be the first to go, paving the way for the mammals to battle it out. Fan Favourite the Big Merino would lead the two other Big Sheep to a dignified defeat against at the hands of the three Big Dogs, who would struggle to a victory over the two Big Bulls, leaving them as easy pickings for the Big Cassowary.

There are a few wild cards in the pack, including two big spiders and 3 Big Ants possessing the strength of 3 giant Brad Parker’s, as well as the most hated and most deadly animal on earth, the Mosquito. What kind of awful town has a giant blood-sucking parasite as their pride and joy? Beers Never Hexham.

While the mosquito can be handled with an opportunistic and well aimed slap, the ant’s would be no match for the whopping 6 Big Crocodiles, including Humpty Doo’s ‘Boxing Crocodile,’ who is always ready for a fight. It seems a giant version of a prehistoric apex reptile that’s 30% mouth and 100% killer is hard to beat. After all, they are essentially just dinosaur’s that didn’t go extinct, so it is only natural that they face off for the ultimate title against the four Big Dinosaurs.

The news isn’t great for the dinosaurs, with Ballandean’s Triceratops, Yarrawonga’s Brachiosaurus and Somersby’s ‘Ploddy’ all consisting on a strictly vegetarian diet. Easy pickings for the crocs. Finally, we get to the Big Kronosaurus in Richmond QLD. ‘Krono’ was the undisputed alpha of the southern seas during the Cretaceous period, measuring up to 11 metres long and with teeth that could tear through even the strongest of shells. They lie in wait on the sea floor and use their massive tail to propel themselves towards prey, the Crocodiles don’t stand a chance. 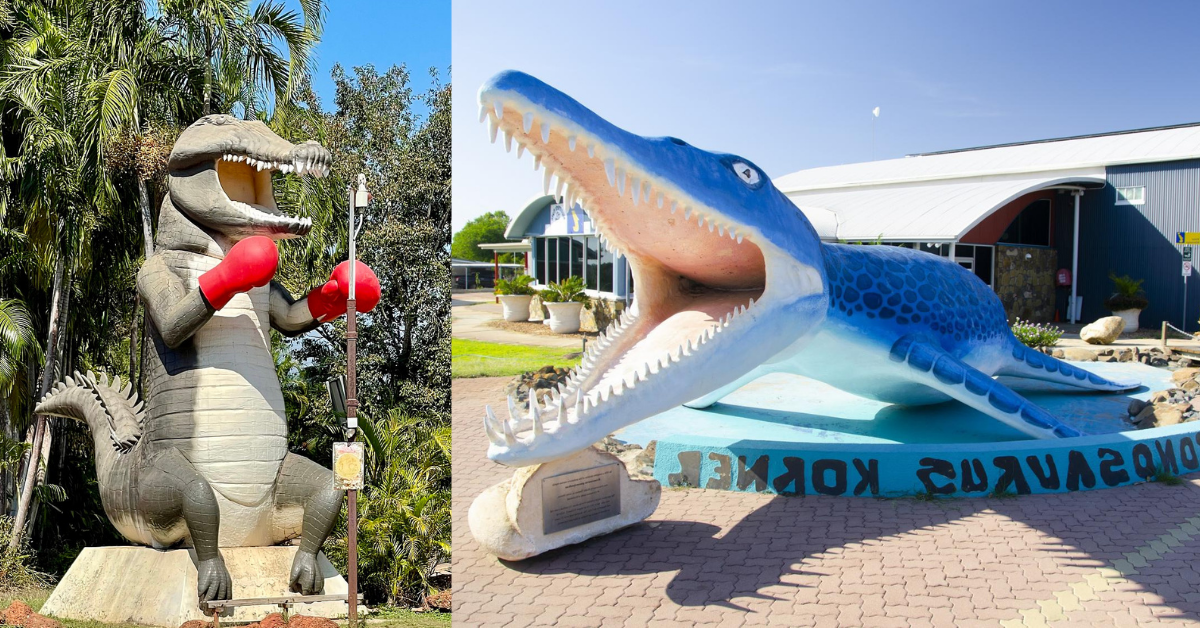