A Dribblers Day Out: Memoirs of a Manly Mauling

by The Old Toony Growler & The Hotline on the Forearm Dribbler 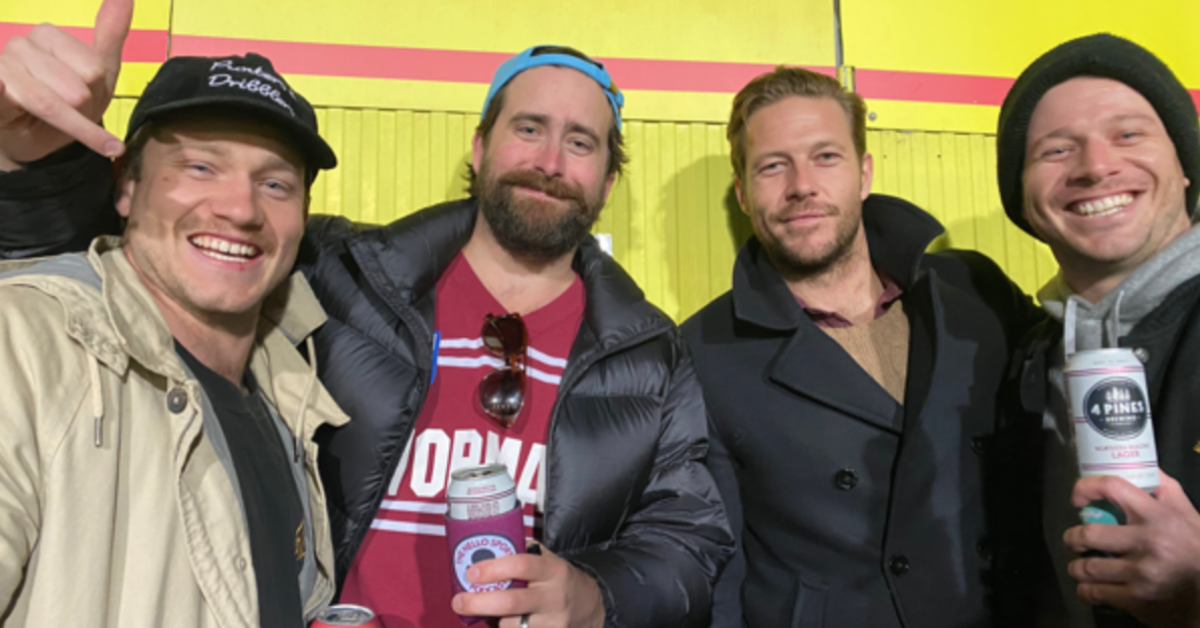 It all started on a Tuesday in June, we received a message from good friend and soon-to-be-thick Manly throbber Kurt DeLuis, that Des has told him “You’re making your debut this Friday night at home against the Cowboys”. My brother and I, who are Sharks and Roosters fans respectively, knew immediately that this was bigger than NRL and petty rivalry, this was about making the pilgrimage to the Mecca of Dribble, Brookvale Oval on a Friday night.

Friday came around and our minds ran crazy over the possibilities, would Kurt line up for kick offs in our corner so we could carry on, how much time would he get on the field, and even – would we see Manly’s favourite sons, Tom and Eddy? Work finished and it was time to make the pilgrimage, the Hotline on the Forearm Dribbler grabbed his Ps & Ds hat and I grabbed a 6 pack of Blokes and then we were off. We didn’t know it at the time, but omenry was at work.

We sucked down a cold Bloke, while indulging in various tropical vapes, while sitting in traffic on the Roseville Bridge, although luckily the footy gods provided the goods, and while we waited listening to Fiocchiario’s recent “Punters and Dribblers” tune – which to do we had to scroll to the last 5 mins of the podcast repeatedly – and we bathed in HD light, the sun shone through the clouds as if it were guiding us on towards Brookvale like the North Star

We arrived at Brookvale and were cut off by some dog, likely Tom’s nemesis with the spacers, which briefly upset me until it caused me to slow down ever so slightly to see the reverse lights of a car, a car leaving from the car space directly next to the Hill Entrance – omen number 1. 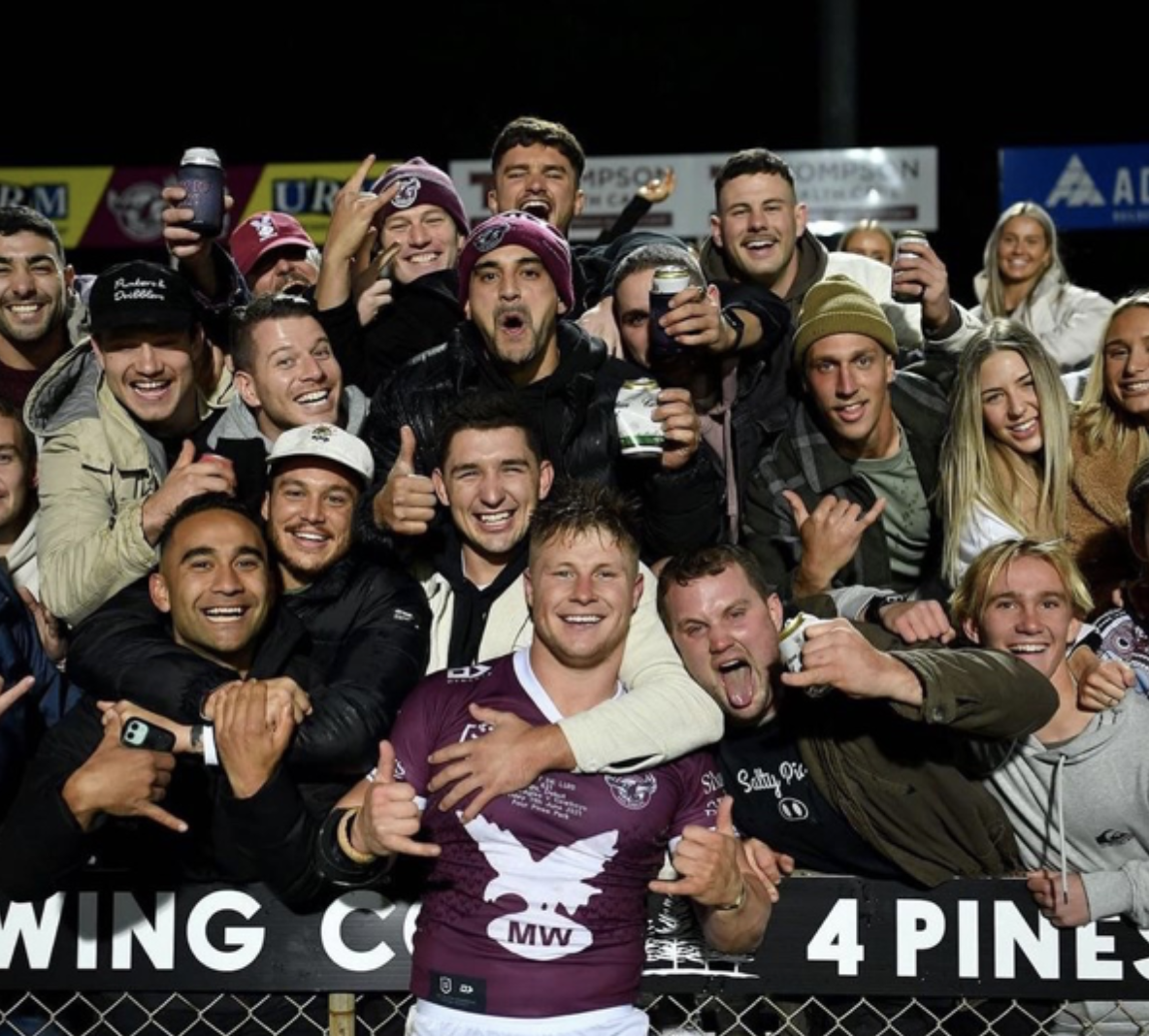 About 15 of us gathered at the Hill Entrance while our mate collected tickets that had been put aside for us at the ticketing office and passed them out. We entered, made the ascent, and then we saw it, Fortress Brookvale. First stop – the bar to load up. And then like a proud father watching his son take his first breath, we saw him, Kurt “the Frenchman” DeLuis trotting around the field for warm-up and looking good for a bloke whose breakfast consisted of two cheese sticks, a coffee, and a vape.

The game started and we were sitting in the far corner watching the Cowboys get out to an early 12-point lead and then Manly worked the score back to about even by the 20-minute mark, and then KDL was summoned for interchange. We carried on like it was a Mad Monday watching him cross the sideline and get his first touch. Shortly after, Manly scored the first of many more tries to come.

My brother and I made a dash for the bar just after halftime. We were walking back down the hill, beers in hand when I heard it……..I know that voice? I stared into the crowd of Manly diehards and as fans moved, it was biblical, like Moses parting the Red Sea, I could see him, it was Tom, and is that Eddy? No…… it’s……. Nudes Soon, and holy fuck he’s hotter in person. I quickly yelled to my brother to stop, he turned around and knew immediately what was at stake, he saw it in my eyes and could sense it, omens in the air.

We made our way up not wanting to be “those guys” who quickly become annoying as fuck, to say a quick hello. The boys welcomed us and we filled them in that our mate was debuting where they called him “The Frenchman” to which we informed them he certainly isn’t French apart from the cheese sticks and vape for brekky. I remember it all like it was yesterday, Nudes Soon’s hypnotic gaze, and the steam that rose through Tom’s beard, or maybe it was vape smoke, either way, it didn’t matter, I felt all the excitement of a bloke watching Holidate with the missus – true dribblers know what we’re talking about.

After introducing ourselves, I informed Tom that my brother was in fact the “Hotline on the Forearm Dribbler” to which he said to Bracey, “This is the forearm guy!”. My brother looked like a child on Christmas Day, honoured to have been mentioned in conversation by one of the Disciples of Dribble. We chatted shit briefly and then got a pic, which I have since swapped into my wallet where the picture of my missus was, I reckon she’d understand. The game went on and an HIA extended KDL’s minutes well into the second half. Manly were now starting to pile on the points and kick-offs were made all the greater as KDL was moved to our side of the field to line up and we could carry on like a long lunch at Mr Wongs, even other members of the crowd got amongst it.

Manly would go on to score 7 unanswered tries and finish the match 50-18. It was clear, when Kurt DeLuis played for Manly, they won 13+, even though the sample size was only one match, omens had been in air that day. This trend continued as Manly took many a team’s soul throughout the next 10 or so rounds.  The great man came over after the match and we yipp’d and yahoo’d while blokes sprayed beers in the air as we all embraced, pics were taken that ended up on the social media pages of NRL, the NRL Roast, Bloke in a Bar etc, all of which proudly displayed the Ps & Ds hat, spreading the word of the podcast like a cult.

We all said our goodbyes after a while and we made our way back to our prime car spot, beginning the trip back home with endorphins running high. So much to take in over a single 2-hour period. As we debriefed and spoke of the night, as we still do to this very day, we cracked a couple of Blokes that were left in the car, which was still relatively cool as it was only 11 degrees outside. We turned on Fiocharrio’s tune once more, and sat in reflection with the windows down to breathe it in, it was cold but we were overcome by a warmth that one experiences after watching a mate debut and shaking hands with Tom, and Nudes Soon Luke Bracey.

At another time, we will catch up with Eddy, but until that time, beers soon,

It truly was, a Dribbler’s Day Out.